NeuroSKILL: Towards a clearer picture of the brain in dementia 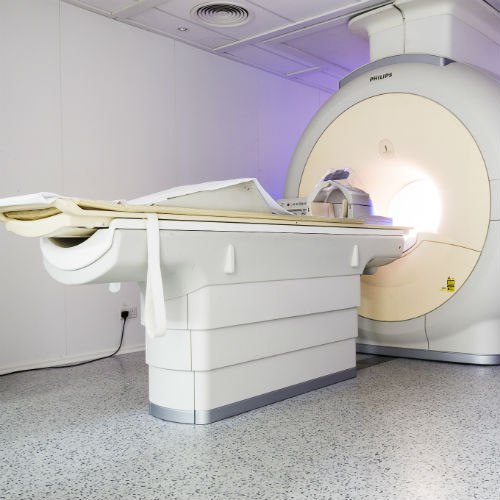 An MRI scanner at Trinity College Institute of Neuroscience

How does a person’s brain change physically as they develop dementia? Are there early clues that imaging the brain could pick up? And how can brain imaging help to diagnose or monitor dementia?

Those are some of the questions being asked by NEUROSKILL, a project supported by INTERREG (financed by the European Regional Development Fund) that links researchers in Ireland and Wales. The scientists are taking detailed brain scans of willing volunteers, and they are informing and training healthcare professionals so that more people with dementia can benefit from new imaging technologies.

Recent advances in brain imaging technology (also called neuroimaging) mean that scientists can now build up a detailed picture of the circuits and brain regions that are thought to be affected in dementia. One region is the hippocampus, which is involved in memory, but there is plenty more to look at, explains Dr Elizabeth Kehoe, who is a researcher with NeuroSKILL at Trinity College Dublin.

“One of the earliest changes we see is a loss in the volume, or size, of the hippocampus,” she says. “But with newer neuroimaging measures we are moving beyond just looking at isolated brain regions. The big thing now is exploring what happens to neural networks.”

The concept is that connected networks in the brain communicate together to function, so a loss of tissue in one area of the brain – something that happens in dementia – could have a knock-on effect in another area.

“It is not without controversy but there’s a theory that dementia affects specific sets of networks,” explains Dr Kehoe. “So we measure these routes or roadways in the living brain, and we find out more about how the brain is wired and how it works together and communicates.”

So far the three-year project has scanned around 70 healthy volunteers and a dozen volunteers who show early clinical signs of dementia, or mild cognitive impairment. By comparing the results, the researchers hope to be able to get new insights into whether and how brain networks change early in dementia, and to look at how physical changes correlate with memory performance.

Brain imaging is a valuable tool for scientific research, but it also has the potential to help in clinical diagnosis too, explains Dr Kehoe, but there are hurdles to overcome. “We need more validation and the use of standard methods, and we need clinicians to know more about what’s available,” says Dr Kehoe.

NeuroSKILL, which involves researchers at TCD, University College Dublin and Bangor University, is surveying medical professionals in Ireland and Wales and the results already show that sometimes doctors aren’t sure about the types of scans that could be useful in dementia.

The project is addressing this knowledge gap through training workshops, and sessions have already taken place. “We want to increase awareness and training in neuroimaging applied to dementia,” explains Dr Kehoe.

NeuroSKILL also plans to make the data from brain imaging easier to use, she adds. “Clinicians often look at an image of the brain and estimate the degeneration in an area, but there are now lots of software tools that can make sophisticated automated measurements,” she says. “So we are working with clinical partners to present the imaging data in a way that is more clinically usable and accessible.”

Ultimately Dr Kehoe hopes that brain imaging will become a more powerful tool in diagnosing and monitoring dementia in the clinic, where it could be used more widely with other measures to build up a clearer picture of what is going on. “We know there are huge changes in the brain in dementia – possibly even long before other symptoms show up – and we know that we can measure them with imaging,” she says. “If you can identify early changes it might offer a bigger window of time to slow down the progression through lifestyle changes and, in the future, new treatments as they become available.”

NeuroSKILL is an ongoing project, and when it is complete, information will be available on the website as a resource for anyone with an interest in dementia. For more see NeuroSKILL.eu.